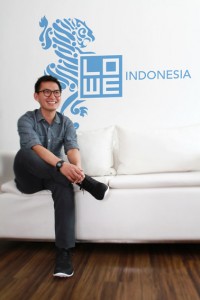 Lowe Indonesia had appointed Roy Wisnu as Chief Creative Officer, earlier this year. The creative prodigy legend was convinced to come back home and handle the agency’s broad creative divisions after spending quite a while abroad in Singapore and United States.

Born in Bandung, Roy is one of Indonesia's all time most awarded creative. In an international career spanning 20 years, his work has been consistently recognized at Cannes, One Show, D&AD, Clio and ADC among others. His campaign with Human Rights Watch for Burma's Political Prisoners earned a D&AD Black Pencil in 2011.

Lowe Indonesia’s CEO Joseph Tan says, “It’s very special to us, because to think about it, Roy, one of the most celebrated creative in the world, actually comes from Indonesia. He had done very well while he was in Singapore as well in New York. Not only that, he’s always been a beacon for a lot of young creative talents in the marketplace, and every young talent that I spoke to wish to be the next Roy Wisnu. So nothing beats having Roy back with us, and I work extremely well with Roy, we have natural chemistry and couple of important people too. I think the combination will be amazing for us, and for Lowe as well, and for the clients at the end of the day.”

Roy also shared, "I see so many opportunities and a passion towards creative excellence in Indonesia (and surely, a lot of homework to be done). These things have called me home. I see this same potential and challenge at Lowe Indonesia, which is incredibly exciting. Lowe is a strong agency, and has all the components and passion to soar. I look forward to bringing my knowledge and experience to everyone there."

Entering the sixth month of Roy’s homecoming, Lowe Indonesia is ready to soar with him. Glad to have you home, Roy!